Charles S. with a Colorado River report from Imperial Dam to Picacho State Park: Fished for a few days over the weekend. Water temps were 68 in the mornings and 72 degrees in select areas. I was a little taken back by the lower temps, as I expected temps to be more around the mid-to-high 70, especial since they were rising by leaps and bound in prior weeks during spawn.


This weekend also contained an added factor: wind, lots of wind. We were under a red flag warning and at times the wind would be 5-15 mph, and then all of a sudden we would get blindsided by a gust over 30 mph, which made boat control quite difficult if not impossible at times.


Having said that about the wind, I missed more hook sets in one weekend than I did all last year. We couldn't buy a hit on a hard bait on either day and while I missed many opportunities while using soft baits, we still managed to catch some decent bass. Bites were borderline lethargic, but the bass definitely showed a preference for stick worms, as well as dark-colored curly tailed worms and medium-sized creature baits.


As I write this report I am thinking of a rookie mistake that cost me a decent size fish, so I will share in hopes that you don't do the same. Anyone that had had to work the front of the boat in a windstorm while slipping current knows all too well the amount of multitasking that one has to do. On Sunday I was in a hot zone I decided to make a last second bait change from a 4-inch worm to a full bodied crawfish.


Since I was on the fish and fighting the wind I just ripped off the worm and put on the craw and flipped it back into the water, never really looking all that closely at the bait. Visually I saw the lure falling and the fish swimming up to the underwater wood off the bank, taking the lure and then turning back to where he came from. Physically, I was reeling as fast as I could to get rid of the bow in my line and as I dropped the rod to make my hook set, I got slammed by a big wind gust that almost knocked me out of the boat. Needless to say the wind gust created a ton of slack line, slack that that I just could not compensate for during a hook set. Still, the fish held onto the bait right until he got to the surface, and then almost nonchalantly, opened its mouth and let go of the bait.


My wife saw it all unfold, but knowing I was having a tough day on the bow, all she said was: "that big fish can chalk today up as it's lucky day." I wish I could be that positive, but all who now me, know I am anything but positive; I took solace in cursing the wind. But remember that earlier bait change? After I missed that fish I was holding the craw in my hand, and only then did I realize that I had a 3/0 offset O'Shaughnessy worm hook embedded in a bait that required the minimum of a 4/0 wide gap offset hook.


The barb never even punched through the bait! Moral of the story? Always make sure you properly match the hook size/style to the bait, always.

Canyon Lake (AZ)
5-15-2014
Dan H. fished Canyon Lake Saturday, May 10 with success on sunfish and bass -and he urges other anglers to do the same: We fished Canyon Lake this morning and caught two sunfish and four largemouth and two smallmouth bass. We weren't out very long but saw several bigggggggggggggg bass still guarding their beds; the ones we caught were 1-2 pounds. But the majority were post-spawn. We had bass chasing our crankbaits on a slow-trolling speed. But if you aren't at Canyon...... Read More 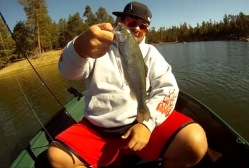