The following is a summary of Mexican Wolf Reintroduction Project (Project) activities in Arizona on the Apache-Sitgreaves National Forests (ASNF) and Fort Apache Indian Reservation (FAIR) and in New Mexico on the Apache National Forest (ANF) and Gila National Forest (GNF). Non-tribal lands involved in this Project are collectively known as the Blue Range Wolf Recovery Area (BRWRA). Additional Project information can be obtained by calling (928) 339-4329 or toll free at (888) 459-9653, or by visiting the Arizona Game and Fish Department website at http://www.azgfd.gov/wolf or by visiting the U.S. Fish and Wildlife Service website at http://www.fws.gov/southwest/es/mexicanwolf. Past updates may be viewed on either website, or interested parties may sign up to receive this update electronically by visiting http://www.azgfd.gov/signup.

This update is a public document and information in it can be used for any purpose. The Reintroduction Project is a multi-agency cooperative effort among the Arizona Game and Fish Department (AGFD), USDA Forest Service (USFS), USDA-Animal and Plant Health Inspection Service, Wildlife Services (USDA-APHIS WS), U.S. Fish and Wildlife Service (USFWS) and the White Mountain Apache Tribe (WMAT).

To view weekly wolf telemetry flight location information or the 3-month wolf distribution map, please visit http://www.azgfd.gov/wolf. On the home page, go to the "Wolf Location Information" heading on the right side of the page near the top and scroll to the specific location information you seek.

Definitions: A 'wolf pack' is defined as two or more wolves that maintain an established territory. In the event that one of the two alpha (dominant) wolves dies, the remaining alpha wolf, regardless of pack size, retains the pack status. The packs referenced in this update contain at least one wolf with a radio telemetry collar attached to it. The Interagency Field Team (IFT) recognizes that wolves without radio telemetry collars may also form packs. If the IFT confirms that wolves are associating with each other and are resident within the same home range, they will be referenced as a pack.

CURRENT POPULATION STATUS
At the end of June 2013, the collared population consisted of 44 wolves with functional radio collars dispersed among 12 packs and four single wolves.

There were two ongoing wolf release operations in June. In the first operation, the IFT maintained two pair-bonded wolves, M1051 and F1126, in a hard-sided acclimation pen on the Alpine Ranger District in Arizona. On June 3, IFT members trapped an uncollared wolf near the pen holding M1051 and F1126, affixed a telemetry collar, designated it f1305, and released it on site. f1305 has been traveling with AM1107 of the Rim Pack and had frequented the pen site. AM1107 was observed trying to fight with M1051 through the fence. On June 13, M1051 and F1126 were removed from the pen and returned to captivity. See the official new release for additional information at http://onlinepressroom.net/fws/.

In the second operation, on May 4, the IFT placed pair-bonded wolves F1108 and M1133 in a soft mesh pen in the Gila Wilderness in New Mexico. They chewed out of the pen, but soon separated. M1133 was recaptured May 11 after moving outside the recovery boundary. F1108 was pregnant when placed in the pen, and the IFT suspects that it whelped pups after its release because it exhibited denning behavior near the release site. In mid-June, F1108 left the area and began moving extensive distances. The IFT believes it did not have any surviving pups. The wolf was found dead in late June due to a gunshot wound.

IN ARIZONA:
Bluestem Pack (collared AF1042, mp1275, m1277, f1280 and f1289)
Throughout June, the IFT located these wolves in their traditional territory in the east-central portion of the ASNF. This pack has produced at least five pups and has remained close to the den site. During June, the IFT located m1277 apart from the rest of the pack, near the Luera Mountains and San Mateo Mountains in New Mexico.

Coronado Pack (collared M1051 and F1126) On June 13, the IFT captured the Coronado Pack inside their acclimation pen and returned them to captivity. The Rim Pack had been visiting the pen site and actively trying to defend their territory against the Coronado Pack through the metal fence. The Coronado Pack has been removed from the monthly summary above.

Elk Horn Pack (collared AM1287 and F1294) In June, the IFT located these wolves traveling in the northeast portion of the ASNF in Arizona. The IFT has no evidence these wolves have a den or produced pups.

Paradise Pack (collared AM795 and AF1056) In June, the IFT located AM795 and AF1056 using their traditional territory in the northern portion of the ASNF and the FAIR. The IFT has no evidence that the Paradise Pack produced pups this year. On June 9, WS personnel investigated a dead calf and confirmed it as being killed by wolves. The depredation was assigned to the Paradise Pack, which were located in the area on June 4 when the calf was killed.

Rim (collared AM1107 and f1305)
During June, the IFT located AM1107 utilizing the south-central portion of the ASNF and the SCAR. Volunteers observed AM1107 visiting the Coronado Pack acclimation pen with an uncollared wolf. On June 3, the IFT successfully trapped an uncollared female near the pen, affixed a telemetry collar, designated it f1305, and released it on site. It has been traveling with AM1107 and is now considered part of the Rim Pack. There is no evidence that AM1107 and f1305 produced any pups this year.

IN NEW MEXICO:
Canyon Creek Pack (collared M1252 and F1246)
In June, these wolves were located traveling together in the central portion of the GNF. The IFT has not documented any pups with this pack this year.

Dark Canyon Pack (collared AM992, AF923, M1293 and f1278)
Throughout June, the IFT located this pack within its traditional territory in the west-central portion of the GNF. On June 4, the IFT documented that the pack had produced at least four pups. Yearling wolf f1278, originally from the Hawks Nest Pack, has been located recently traveling with M1244.

Fox Mountain Pack (collared AM1158, AF1212, M1276, m1274, f1281 and f1295)
During June, the IFT located these wolves in the northwest portion of the GNF. The IFT has documented denning behavior with this pack, and a food cache has been maintained to help alleviate any depredation issues. Periodically throughout June, f1281 and f1295 were located separate from AM1158 and AF1212. The IFT documented two uncollared wolves with this pack, and suspect they are yearlings.

Halfmoon Pack (collared F1108)
In late June, the IFT located F1108 dead in New Mexico due to a gunshot wound. The incident is under investigation. The IFT believes F1108 whelped pups when in the Gila Wilderness following its release; however, the IFT does not believe any pups survived. The Halfmoon Pack has been removed from the monthly summary above.

Prieto Pack (collared F1251)
Throughout June, the IFT located this wolf in the north-central portion of the GNF. In May, an uncollared wolf was observed with F1251 on trail camera. The IFT has documented denning behavior in this pack, and is maintaining a food cache to alleviate potential depredation issues.

San Mateo Pack (collared AM1157, AF903, M1249, m1282 and f1292)
In June, most of these wolves continued to use their traditional territory in the northern portion of the GNF. No denning behavior has been documented. In late June, the IFT observed seven wolves in this pack; three were uncollared. The IFT initiated trapping in late June in an attempt to replace collars on AF903 and AM1157.

Willow Springs Pack (collared M1185 and F1279)
Throughout June, the IFT located these wolves in the north-central portion of the GNF. In May, the IFT documented denning behavior and confirmed the presence of pups. The pack continued to exhibit denning behavior during June.

M1240 (collared)
Throughout June, the IFT located M1240 primarily in the central portion of the GNF.

M1243 (collared)
During June, the IFT was not able to locate M1243, and now considers it fate unknown.

M1244 (collared)
In June, the IFT located this wolf traveling in the central portion of the GNF, north of the Gila Wilderness. The IFT located M1244 with f1278 from the Dark Canyon Pack throughout June.

M1296 (collared)
During the June 17 weekly telemetry flight, the IFT located M1296 between the San Mateo Mountains and the Magdalena Mountains in New Mexico.

MORTALITIES
In late June, the IFT found F1108 of the Halfmoon Pack dead due to a gunshot wound. An investigation is ongoing.

On June 9, WS personnel investigated a dead calf near Sheep Springs in Arizona. Their investigation concluded that the calf was killed by members of the Paradise Pack on June 4.

On June 18, WS personnel investigated two dead calves near White Mountain Reservoir in Arizona. The first calf was killed on June 13, and was confirmed as being a wolf depredation. No collared wolves have been in this area, and the depredation was assigned to an uncollared wolf. The second calf was killed June 17. The determination was it died of unknown causes.

CAPTIVE MANAGEMENT
On June 13, M1051 and F1126 were transferred from an acclimation pen at Corduroy Creek in Arizona to the Ladder Ranch Wolf Management Facility.

COMMUNICATION AND COORDINATION
No significant activity this month.

Trout fishing in Arizona is only picking up with monsoon activity. 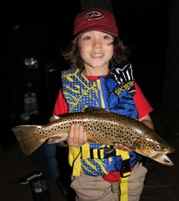 7-15-2013
Many high country fisheries are scheduled to be stocked this week. But first some great news from Patagonia Lake! We have...... Read More