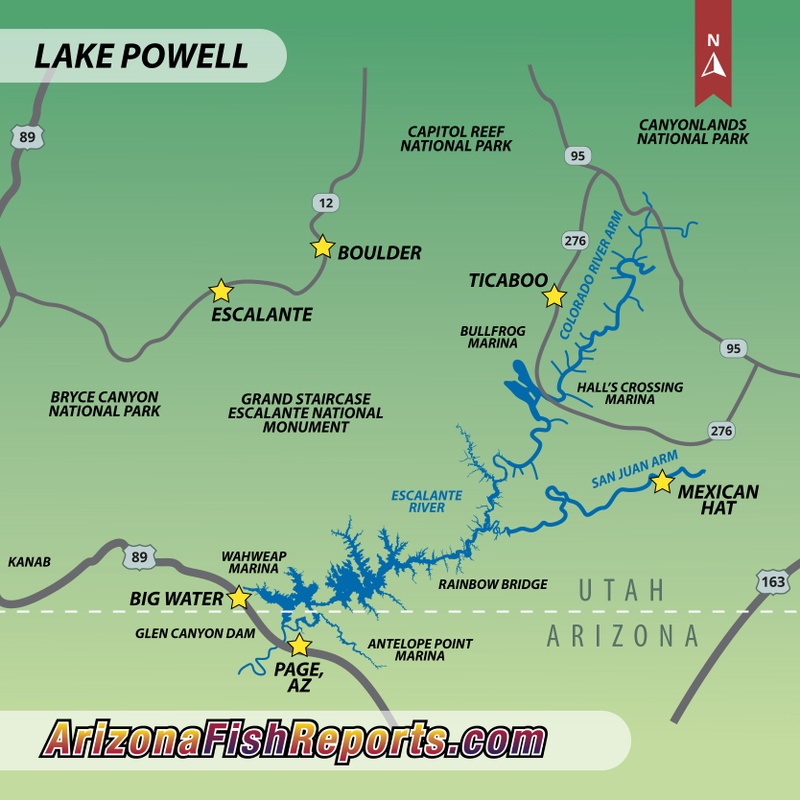 Lake Powell (Sept. 2 report courtesy of Wayne Gustaveson, Wayneswords.com) continues to slowly decline at the rate of about one foot per week as of early September. Launch ramps at Wahweap and Bullfrog were still six feet above 3,525 MSL, which is the elevation when launch ramps will have to resort back to boiler plate to allow boats to launch. Launching will be possible well into October. Surface temperature was still in the 80s at the beginning of the month but has dropped into the mid 70s as of about the third week of September. As the lake surface cools, fishing success should warm up.

I launched at Stateline Legacy Ramp at Wahweap early in the morning before the sun peaked over the eastern horizon. There was just enough light to see fish jumping as we headed through the wakeless area near the launch ramp. As we got closer to the surface action, we could identify yearling stripers (8-12 inch) that were really excited while chasing 1-3 inch shad. When in range, we tossed surface lures over the active school and then reeled the lures back with a side-to-side swimming motion. The little stripers loved the lures and whacked them repeatedly. Once in a while a tiny striper would hit the lure just right and we could reel in the small fish and then throw it back and catch another one. We were fishing some serious mini striper boils and having great success, but the stripers were small. So, we switched to the next best option.

Each time we passed over the boiling striper school, the graph lit up with deep schools showing up at 30-50 feet. Top water fishing is great fun, but we dropped spoons down to see what fish were holding in deeper water. As soon as the spoon passed through the deep school, large stripers hit the lure and we had 2-4 pound stripers testing the drag and our line strength as they tried to swim away from us. Fortunately, we did not lose any lures and we put a lot of big stripers in the boat. It was a great morning of fishing, but eventually the sun came up, then more boats started to launch on the ramp. When the first wake board boat buzzed past us we headed toward calmer water and left the striper schools until next time.

When searching for surface boils, the best lure is a Kastmaster spoon which can be cast long distances to surface-feeding fish, and then dropped into deep water as the fish leave the surface and drop down 30-50 feet to cool off. Adult stripers cannot stay in 80-degree water for more than a minute or two. Stripers are always anxious to eat, but warm surface water does not let them stay on top with shad who run away as soon as the stripers leave. Boils will be in a different spot each day as shad attempt to hide from feeding stripers.

We left the busy launch ramp and found a small canyon with tall walls and shady coves with floating tumbleweeds. We put away our surface lures and spoons and put on single-tail plastic grubs and dropped them to the bottom in 15-20 feet of water. Both largemouth and smallmouth bass were quick to respond. The morning fishing was very successful as we caught three species of fish in just over two hours. We then turned the boat back toward the launch ramp and retrieved the boat and filleted the big stripers. This was a great day of fishing. Late September and the month of October will be really great as the air and water temperature drops and the fish perk up!

Lake Powell
8-19-2022
August 19, 2022 Water Temperature 79-83F Lake Elevation 3533 As I returned from my summer vacation I found that Lake Powell is 17 feet lower than it was a year ago. The good news is the lake is still 11 feet higher than the low water mark reached this spring. We are also having some monsoon rain storms that will slightly slow the decline, but the lake will eventually reach a new low level this winter. Now all we need is a great...... Read More