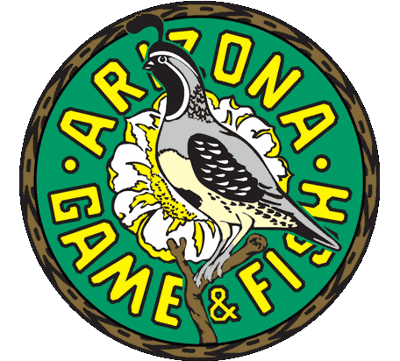 KAIBAB LAKE — We are still getting good reports from Kaibab. Folks are catching the big stockers on lures. Worms under a bobber might also work. The campground is closed.

CATARACT LAKE — I haven’t had any recent reports from Cataract Lake. We caught a quite a few nice bass, bluegill and channel catfish when we sampled the lake in August. The catfish were mostly on the road-side of the lake while the bluegill were along the dam. We also caught a 4-pound brown trout on the north side of the lake. It was caught around a bunch of small bass so a bass colored lure might work.

DOGTOWN LAKE — We are hearing that the fishing is picking up on Dogtown. Some 12-14 inch trout are being caught. I would try lures fished slowly or worms under a bobber might also work. The campground is closed.

SANTA FE — The lake is full. No reports.

WHITEHORSE LAKE — No report. The campground is closed.

ASHURST LAKE — Fishing is better from a boat using lures and flies than from shore.

KINNIKINICK LAKE — Some folks from the office fished Kinnikinick 2 weeks ago and found fishing to be tough. Using the sonar on the boat they found fish scattered all around the lake at about 10 feet of depth. There were also fish hitting the surface in the weeds.

OAK CREEK — No report. Has been stocked.

BEAVER CREEK – No report. Has been stocked.

WEST CLEAR CREEK – No report. Has been stocked.

This will be the last regular fish report from Lake Powell this year. We begin our fall sampling next week and will be out on the water until mid-November. When we finish sampling, there will be reports to update everyone about what the fish are up to in this most unusual year. Weather was cold in the springtime and continued into the summer, moisture was above normal, and runoff was strong bringing the lake up 53 feet. Something happened during this strange weather period that the fish really liked. Shad reproduction was unprecedented. Bass and crappie spawned in the inundated brush line producing a new crop of these valuable sport fish. Sampling next week should give us valuable information on year classes of stripers and smallmouth bass.

Threadfin shad numbers are much higher than normal. Gizzard shad are abundant all over the lake. Sport fish have responded to the shad smorgasbord by changing their habits to eating shad leisurely anytime they get hungry. There are shad schools found in virtually every canyon, which are available for bass and stripers who simply swim up, eat and then go back to their resting spot. The most amazing anomaly from high forage is smallmouth bass behavior. Smallmouth moved offshore, away from their normal rocky habitat and chased shad in open water, very similar to how stripers normally behave. This Fall smallmouth boils were seen with green fish swimming right alongside stripers or sometimes in completely green boils.

Striped bass behavior is even stranger. Adult stripers boiled a few times in September and October, but more often striper schools disbanded and each fish fed on its own in the giant shad schools found lakewide. While fishing for stripers yesterday, we found 2-3 individual fish traces on the bottom. We dropped spoons down to these fish in 40-70 feet of water. Usually the spoons were ignored, but on 3 different occasions, a striper was hooked and landed. Then the graph showed more fish coming to investigate what that one fish had eaten. This recently assembled school of stripers was an easy target to drop more spoons and catch more fish. Normally we see a large striper school on the graph before dropping spoons. Right now, we need to test all the fish traces seen on the graph. That would seem like a hard task but the screen is usually blank with most of the forage and smaller sport fish being close to the surface where a graph does not detect them.

Largemouth bass spawning was very successful, which was long overdue. Schools of 8-10 inch largemouth bass are common swimming along the lakeshore. Largemouth bass and crappie need brush as shelter to survive. That shelter was provided this year and is still available right now. Another large runoff next spring would ensure bass and crappie can rebound from years of barren shoreline without brushy habitat.

Lake Powell fisheries are in a great place right now. It is reminiscent of the filling period, I remember from 1975 to 1980. Another above average spring flood in 2020 would seal the deal. No runoff next year would take the air out of my optimistic bubble. Time will tell. Right now, shad forage and sport fish health is over the top, which has made fish harder to catch. Despite drought and quagga mussels, this resilient lake has come back to its glory days. Just look at the fat stomachs of bass and stripers to see the evidence. 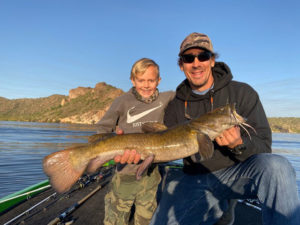 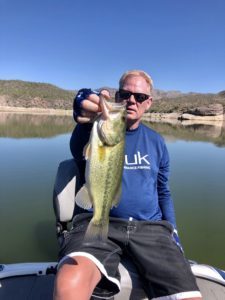