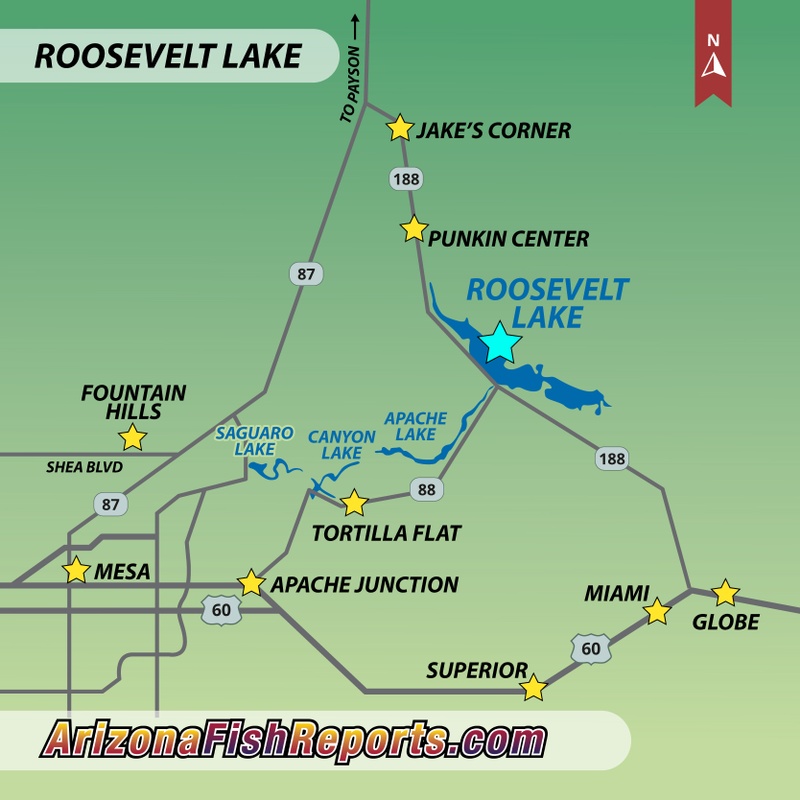 The water flows into Roosevelt Lake remain at low levels even with the recent monsoon activity.

The Tonto Creek has just a trace of water flowing and the Salt River is flowing at 100 CFPS or at 50 percent of its normal flow for this time of year. The lake level currently stands at 42 percent full. Any level below about 45 percent full is a concern to ranchers in the Roosevelt Lake area that cattle may become stuck in the mud as they try to reach the water. In some cases this results in moving cattle away from the lake until the water level increases. There is also concern among experienced anglers, and game and fish representatives that the low flow rates and higher temperatures can result in algae growth which can kill fish.

Bass fishing reports for both Roosevelt and Apache lakes were called fair during the daylight hours and good fishing conditions during the night. If you like to fish in the morning, you'll need to get to the lake early since most of the action is happening at safe light but before sunrise. At that time of the morning, bass can be seen chasing bait into shallow waters and boiling on the surface.

Bass anglers know that a reaction bait such as a shallow running crank-bait. spinner-bait or a Super Fluke bait can catch several fish in a short time. Top-water baits such as a Rico, popper, or a frog were also reported successful. Once the sun comes up, the temperatures increase dramatically and the surface bite stops abruptly.

Anglers are using a dropshot or a Texas rig technique for the remainder of the morning but that bite is very slow on most days. The top-water action is returning in the evening however, it is reported to be sporadic. The full moon this week has most local anglers fishing at night. Texas-Rigged worms, jigs, and a dropshot using darker colored baits are being reported successful.

Crappie anglers are also fishing the full moon phase. A live minnow is the best technique for crappie fishing after dark. The hot spots this summer for crappie fishing are Windy Hill and the Marina. Both of these areas are close to ramps so if a storm approaches, anglers can get off the water quickly. During the monsoon season, bass anglers need to constantly monitor the conditions of an approaching storm. If you wait for the storm to reach you before you take action, you've waited too long; plan ahead.

Lake Pleasant
7-21-2016
Water levels have been falling (down 25 feet over the past 3 weeks). Best bet lately is casting and watching for top-water activity or locating schools. The nighttime bite will be great during this full moon, but fishing with submersible lights will be a bit less effective. Trolling for stripers has been hit and miss. Stripers still are being caught in 50-80 feet of water. Try Castle Creek and Cole Bay. The evening top-water bite has been better than during...... Read More